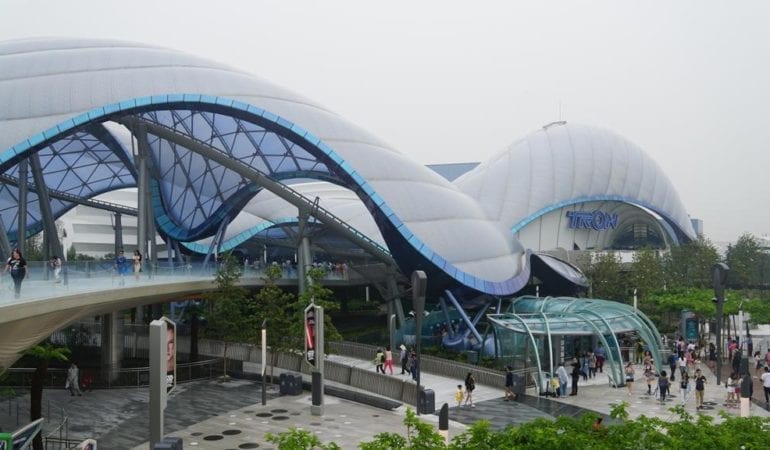 Disney parks are slowly expanding into high-tech and sci-fi attractions.

We’ve seen the introduction of Star Wars Land, which should fully launch between May and August 2019. But that’s not all Disney’s bringing us…

TRON – Coming to the US.

At Orlando’s Magic Kingdom, Disney has started the construction of TRON. This is a new scientific-looking attraction.

Inspired by the Show.

Quite obvious, isn’t it?

That movie was actually designed by the Walt Disney Company, and as a way of riding the sci-fi trend of the time.

It became quite popular. But while this movie became well-known, it was never as iconic as Star Wars and its sequels.

And that’s why Disney is bringing it back. The company wants to revive Tron for all its fans to enjoy!

Did we mention that the TRON rollercoaster isn’t a new invention?

It’s already installed in one of Disney larger parks, located in Shanghai. And it’s quite fascinating in looks and scenery!

In fact – the photos you see of Shanghai’s TRON only give you a glimpse into what the US will get!

It should be noted that TRON won’t launch in 2019. In fact, what we have now are announcements of its development.

According to officials, Magic Kingdom’s TRON should launch by 2021. So you’ll have to wait a few summers to enjoy it…

But until then, let’s speculate a little.

How TRON Should Turn Out.

We expect this attraction to mimic the Chinese. That is, in both looks, the rules on riding the attraction, and its feats.

Starting with the coaster’s feats, the Shanghai variant goes up to 60 MPH. So it exceeds highway limits in speed!

And this means that this attraction is a large distance crosser. In fact, we expect the roller coaster to take up a few hectares of space, just to supply room for the speedy locomotives!

However, speed isn’t everything. There are also height restrictions.

You’ve got to buckle up and duck through the ride. Because the restriction sets the height restriction at 4 feet.

Basically, enjoying the TRON park should feel like riding a motorbike at high speed!

A Play Zone for Grown Folk.

Ride height and speed aside, this is an attraction for grown people.

We don’t expect children to fully understand or appreciate light-cycles. But if you’re someone who grew up in the 70s, then you just might.

If anything, this attraction deserves a visit.

We recommend planning a stop to TRON for your next 2021 Disney Tour.

It’ll be a few summers till then, but a place like that is worth the wait.

And don’t forget to turn TRON into a holistic visit, because with Disney, there’s a lot to see and explore. And we assume you’re not just visiting for one attraction.

The TRON rollercoaster should be part of a whole package!