Add it to the Bucket List: New Years at Disney 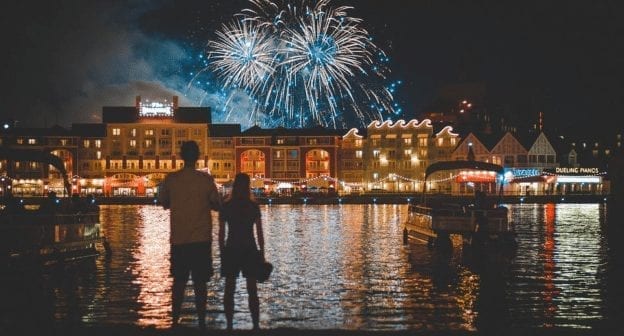 When you think of New Year’s Eve, you probably think of fireworks, champagne and the big ball drop. But have you ever spent the biggest night of the year at Disney World? If the answer is no, you are truly missing out. New Year’s Eve is arguably the best night to be at the Disney parks. If you need some convincing, let us explain everything the parks have to offer.

One of our favorite parks is also the most popular park on New Year’s Eve. The reason is clear: Magic Kingdom’s NYE schedule is jam-packed, from morning to night. Start the day with the “Move It! Shake It! Dance and Play It!” street parties in the morning and afternoon, great for kids and adults alike. Then head over to watch the famous Mickey’s Once Upon a Christmastime Parade. This popular parade is known for its elaborate floats, costumes and of course, Santa Claus.

Ever wonder what it would be like to experience New Year’s Eve in China, Mexico or France? If so, head over to Epcot. Experience the smoke-billowing dragons in China, enjoy Euro-pop music in Italy and dance to Latin tunes over at the America Gardens Stage. Of course, the night would not be complete without a spectacular firework show. Check out the IllumiNations: Reflections of Earth firework show, which steps up its already amazing show just for New Year’s Eve.

Just because you are at Disney does not mean you need to skip your New Year’s Eve dinner. Make a reservation at one of Epcot’s top restaurants, all of which offer a special New Year’s Eve menu. Check out La Hacienda de San Angel, Le Cellier Steakhouse, Monsieu Paul or the New Year’s Ever World at Epcot World ShowPlace. If you need help making reservations, our staff at Five Star Private VIP Tours will be glad to assist you.

A close second to Magic Kingdom, Disney Hollywood Studios is typically one of the most popular parks on New Year’s Eve. The Fantasmic! Theater will present its famous shows at both 8:00 and 9:30pm, but make sure you get there early to grab a seat. There will also be a Center Stage Dance Party, the Star Wars: A Galactic Spectacular and the Jingle Bell, Jingle BAM!.

If you have little ones who will not be making it to the midnight countdown, then Animal Kingdom is your best bet. There are no special New Year’s Eve events going on, so the park will be significantly less packed than the others. Also, the park will be closing early. Head over with your kids and enjoy the fun the park has to offer and still make it home for bedtime.

Disney World is an amazing way to spend your holidays. The extent they go to celebrate, whether it is costumes, decoration or special events, is truly spectacular. If you are interested in spending New Year’s Eve at the happiest place on Earth, contact us to reserve your trip today. Enjoy the holiday with your family and friends and let us take care of all of the details.