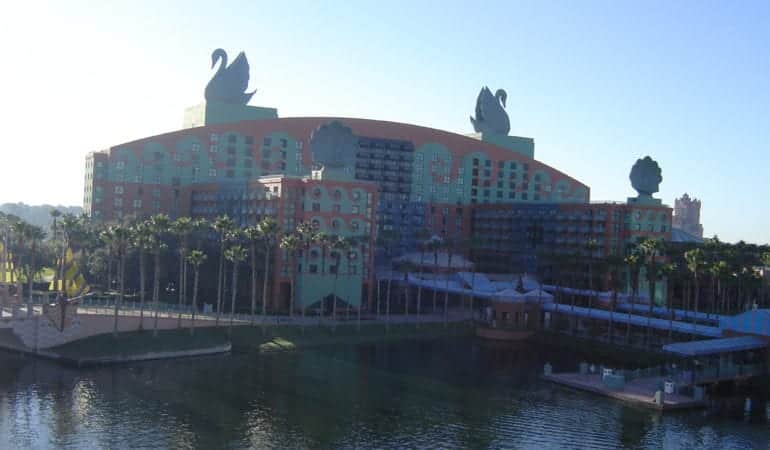 Near Epcot lies the Walt Disney World Swan & Dolphin on-site hotels. Although these resorts are inside the Disney World, it handles all their reservations. Owners of these hotels are Sheraton (Dolphin) and Westin (Swan). Disney transportation serve them both to the theme parks. Opened back in 1990, the resorts face each other on either side of an inlet of Crescent Lake. The Swan has a 12-story main building lined by two 7 story towers. Two 47-foot-tall swans embellish its roof. The giant swans look swanlike. The Swan’s lobby is so small that it seems an afterthought of a wonderful architecture idea. Both resorts feature art of wildly different styles and eras The Swan has a conventional rectangle pool. The Grotto Pool has an organic shape with a waterfall and slide

Because Disney doesn’t run the Swan and the Dolphin hotels, service is less joyful than at other on-property resorts. For example, both hotels charge $35-per-day resort fee and another $25 per day for self-parking. At whatever rate you staying at the Swan hotel expect to add another $50 per day for misc.

Often these rooms at hotel are 360 square feet and have two queen-size beds, and a desk and one chair. The present layout integrates light-colored woods, glass surfaces, blue carpeting, and gray draperies, some of rooms have balconies. Hotel’s beds are made for comfy sleeping and the reading light is great in or out of bed.

Each Swan room is well-equipped with the following:

The mini-fridge next to the dresser is more like a drink cooler than a refrigerator, So you won’t be able to freeze ice cubes or popsicles in it.

The hotel’s bathrooms aren’t big, but aren’t as small either as the ones you’ll find in other Disney moderate value resort rooms. Shower’s water pressure is average and a separate sink area is located next to the bathroom, it has enough space to fit most of the toiletries you would need. A wall-mounted hair dryer is provided as well.

Swan and Dolphin has three pools. The largest, Grotto Pool, is next to the hotel’s convention center. There is also a hot tubs, kiddie pool, and water play area. Also two other smaller pools are located outside of each structure. They do have plenty of chairs and tables around the pool.

Playgrounds at Swan and Dolphin

On the Swan side of the resort a small playground is located near the pool. The ground has small plastic slide and few of sections for toddlers to go up and down. There are no swings due to safety precaution taken by the Swan and Dolphin hotels, and the entire area is covered in a springy, poured rubber surface and sand.

Five Star Orlando VIP Tours makes it easier to visit Disney World Resort in Orlando by providing Disney attractions knowledge, and have their guests under professional supervision all the time and helping with accessibility and convenience of planned schedules so that you can relish good times with your family.